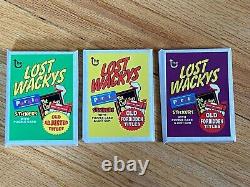 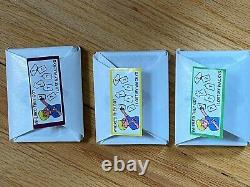 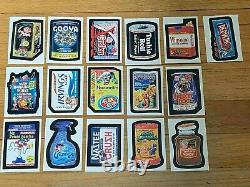 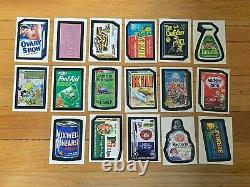 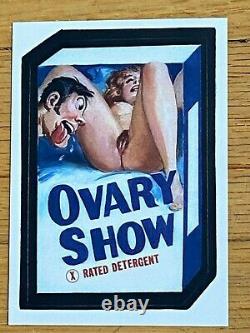 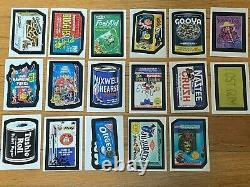 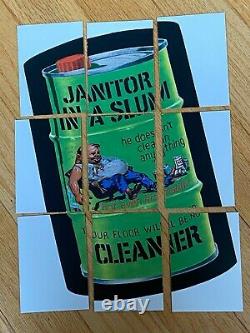 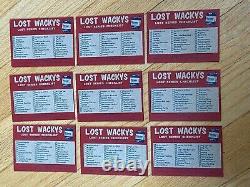 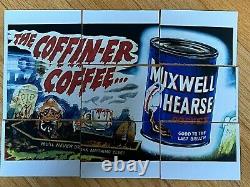 2005 Lost Wackys - 1st Series set (50/50) plus 2 complete puzzles. In 2005, Wacky Packages fans produced 120 sets of a 1st Series of Lost Wackys based on the collections of several serious collectors, according to website WackyPacks.

After discussions with Topps, the group of collectors were given permission to print a very limited number underground run intended for die-hard collectors. Versions of some cards that had not been approved by the group were included in the first run and then later replaced with cards offered in the Green Pack. This set includes the two 9-piece checklist puzzles. Janitor in a Slum came divided up in the Purple and Yellow Packs, while Mixwell Hearse came in the Green Pack. The 50 stickers in this set include.

Potato Famine (v2), Mixwell Hearse (v2), The Little Barmaid, Hawaiian Punks (v2), Tushie Roll, Pig Pen (v2), Orgeo, Jujubats and Grow Germ. Bonus stickers not on the checklist included Red Veins, Ovary Show, Orgeo, Jujubats, Runny Face and Grow Germ. More than half the titles in the set were later printed by Topps, although several as of 2017 had not been printed.

Three titles (Kill, Pig Lips and Porkies) were considered lost when LW1 was printed, but it later came to light that they had been published in the 1981 Test Irish series in limited quantities. This collection includes the alternate and bonus cards and second alternate puzzle found in the Green pack.

Please ask if you have any questions. Please see my other Wacky Packages auctions. The item "2005 LOST WACKY PACKAGES 1ST SERIES FULL SET 3 PACKS @@ SUPER RARE @@" is in sale since Sunday, October 18, 2020.